Tower servers look a lot like PCs. Each tower server is a standalone machine that is built into an upright case.

Tower servers are used mostly in smaller datacenters. Larger datacenters typically avoid the use of tower servers because of the amount of physical space that they consume and because they tend to be noisy.

Another disadvantage to using tower servers is that the cabling can get messy. Server racks and blade server chassis usually have features that are designed to manage cables, but tower servers have no such features.

As the name implies, rack servers are servers that are mounted within a rack. The rack is of a uniform width and servers are mounted to the rack using screws. Each rack can accommodate multiple servers and the servers are typically stacked on top of each other.

Rack mount components follow a form factor that is referred to as a rack unit. A standard rack mount server is referred to as a 1U server meaning that it is 1 rack unit in size. A 2U server consumes two rack units of space within the rack. Some vendors also offer 4U and ½U servers. The larger form factors are usually used when the server needs to be able to accommodate a large amount of storage. 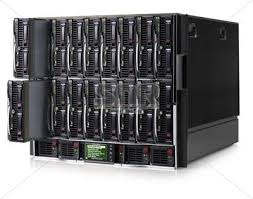 Like rack servers, blade servers also adhere to a standard size and mount inside a special “rack”. In the case of a blade server however, the rack is known as a chassis.

Blade servers tend to be vendor proprietary. You can’t for example insert a Dell blade server into an HP chassis.

The reason why blade server design is proprietary is because unlike a rack server, which is fully self-contained, blade servers lack some of the components that they need to function. For example, blade servers do not have power supplies.